Back to the M. C.  Escher meme and Goetz (or Goete in Korea) Kluge’s partial comment on the previous post:

Recently I got curious and looked a bit beyond Henry Holiday. Artists have fun in alluding to other artists. So, how about M. C. Escher?

So, following his link, I found a side-by-side comparison of Escher’s Cimino Barbarano (1929) to The Bard (circa 1817) by John Martin, an English Romantic painter, engraver and illustrator. The page had other fascinating (and complicated) comparisons, too, but I’ll just stop going off on tangents and concentrate on the post at hand. 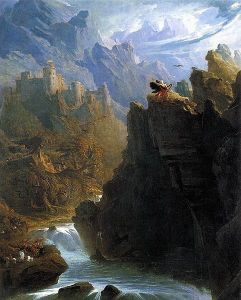 For this side-by-side comparison, [not shown here] I redrew and then horizontally compressed Escher’s lithograph after applying selective Gaussian filtering in order to remove details which are not required for the comparison. Parts of the image on its sides have been removed. The top of Martin’s painting has been removed too. The remaining segments of both images have been redrawn and are just good enough for comparison.

I don’t know much about selective Gaussian filtering, or, really, how to redraw or horizontally compress anything. I didn’t really know much about The Bard either. I found a review of a past John Martin exhibition at Tate Britain which begins:

“On a rock, whose haughty brow
Frowns o’er old Conway’s foaming flood
Robed in the sable garb of woe
With haggard eyes the Poet stood;
(Loose his beard, and hoary hair
Stream’d, like a meteor, to the troubled air)
And with a Master’s hand, and Prophet’s fire
Struck the deep sorrows of his lyre.”

The opening image of the Tate Britain’s exhibition is Martin’s ‘The Bard’ and it can provide us with several possibilities for understanding his oeuvre… ‘The Bard’s mad gesture blends with the jutting landscape; the English army’s progress is defined by the river it trundles past…

Back to his side-by-side comparison. I had assumed Escher’s Italian landscapes were of actual places in Italy because the Citadel of Calvi Corsica (see Escher: Anni Romani) is a real place but Cimino Barbarano is not.

And Goetz explains, “Here Escher perhaps has combined an Italian scenery like Civita di Bagnoregio with what is supposed to be a Welsh landscape.”

I can see the relationship to Civita di Bagnoregio, but didn’t know why it would necessarily be a Welsh landscape. According to ArtMagick website:

The subject comes from Thomas Gray’s poem The Bard (1755) and had been popular throughout the Romantic period, with versions by Thomas Jones, William Blake and Henry Fuseli. Gray tells how Edward I, after his conquest of Wales, ordered all bards to be slaughtered in order to draw the people’s cultural and nationalistic sting.

The site includes a link to The Castles of Wales, and eerily, the tall tower in Escher’s castle looks (almost) exactly like Dolwyddelan Castle in northwest Wales. I have no idea how Escher could have known that.

NOTE: This post doesn’t do justice to Goethe’s work but I’m honored that he shared it with with me.

click on Mask of Silenus at the Cummer Museum!